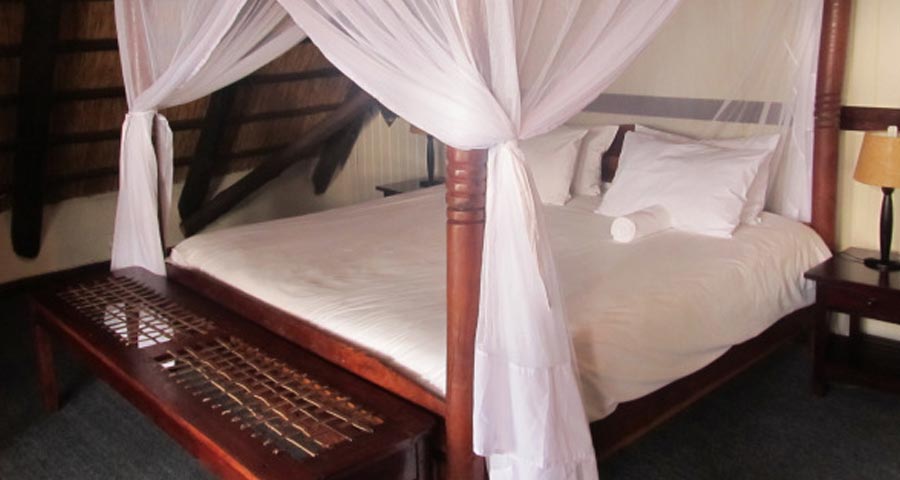 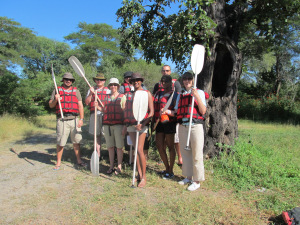 All the agents (except for 1) met at OR Tambo International and were accompanied by Brenda from Three Cities to Livingstone, Zambia. On arrival in Livingstone we were met by Triana Volek from Safari Par Excellence, as well as the agent from Expedia.com who was already in Zambia.

We then proceeded to a drive through tour of the town, various points were pointed out (oldest hotel in Livingstone / Curio market / local pub). A stop was made at the Livingstone Museum and we were allowed to go through the exhibits on our own. There are a lot of historical artefacts housed at the museum and while it was fine to go through it on our own, I would recommend guests having a guide take them through to further explain the history. 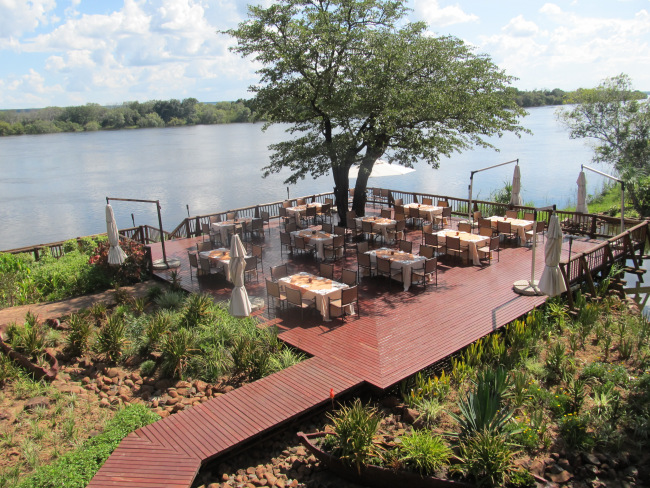 We were then taken to the David Livingstone Safari Lodge and Spa, which was where we stayed for both nights. The hotel is a lot bigger than I expected it to be. 72 standard rooms plus 5 loft suites. The main difference with the suites being that they have a separate lounge area.  The hotel is built on 2 floors, and has a very similar look to the Victoria Falls Safari Lodge. The standard rooms are spacious and very comfortable. Bathrooms have baths and showers and all rooms have a small patio (ground floor) or balcony (2nd floor).

The hotel also has a spa, with several treatment rooms. This is located next door to the gym. While the gym is relatively small, it was well equipped and also housed a small steam room and plunge pool.

The hotel has a small boardroom which can hold approximately 20 delegates however they are currently building a large conference centre which will be able to hold up to 140 pax. They are gearing themselves for the MICE market and given the size and facilities at the hotel I think it would work well. The hotel has Wi-Fi and guests get 500MB free, there are several areas that can be set up for meals for groups other than the bar and restaurant and they have their own boat, The Lady Livingstone, docked at the hotel.

Another thing to remember is that they are wheelchair friendly and are currently the only hotel in Livingstone that have a lift. 2 of their rooms are also geared for disabled visitors. Most rooms have 3 stairs going from the entrance to the bedroom. 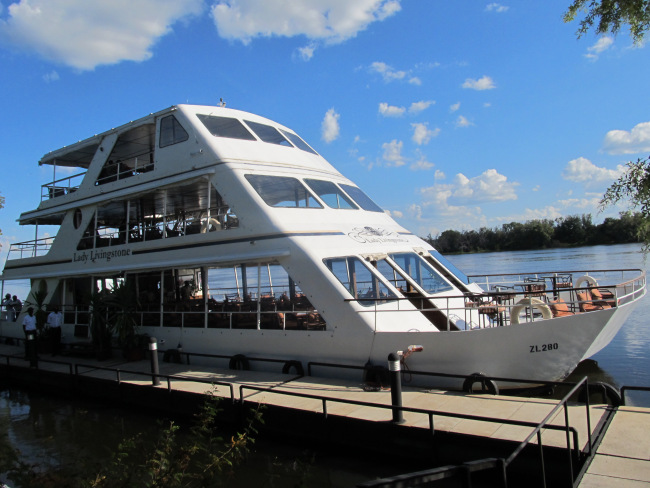 We were treated to a sunset cruise aboard the Lady Livingstone before dinner. The boat has 3 floors and can carry up to 140 guests. Also works well if you have smaller groups that want a ‘private’ cruise as they can have one of the floors booked for themselves.

The boat was very comfortable and they had a wide selection of drinks and also provided 3 courses of snacks! While we did not see much during the cruise (only 2 hippo), we caught a beautiful sunset. Dinner was at the hotel and the food was good, lots to choose from as well.

This morning we were treated to a Raft Float. It was a slow and relaxed meander down the Upper Zambezi. Its calm enough for guests to take their normal cameras, but guests need to be advised to take hats and sunblock as it was a scorcher that day…

I deepened my current tan! This activity works well for large groups as well. We caught a glimpse of some hippo and were lucky to see a huge herd of elephants all taking a dip at the river banks. 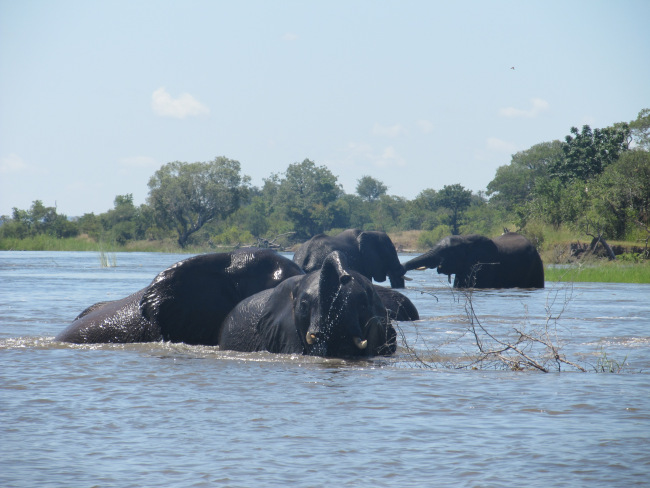 We stopped at a picnic spot along the banks of the Zambezi where we had a large spread waiting for us. The picnic spot can be used by locals as well, not a private venue. Ablution facilities were available but were not in the best condition.

After lunch we were taken to The Zambezi Waterfront. I was expecting this to be a shopping mall but it’s actually a hotel. 3 star, very basic but clean and fitted with all the necessary amenities.

The main hotel holds their standard rooms which are built facing either the river or the large pond that holds quite a few monitors. 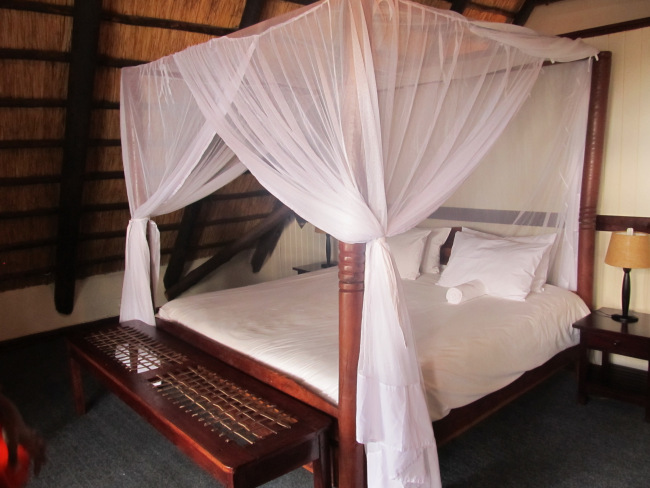 They also offer tented accommodation (tents built on concrete slabs but fitted with wooden beds and a fan). These have shared ablution facilities available and guests are able to book their meals at the hotel’s restaurant. They are used quite often by the overland trucks that pass through such as Sunway and Nomad.

There is also a camp site available where guests can use their own tents.

Safari Par Excellence also have their offices based at this hotel as well as their briefing centre (a small amphitheatre at the back of the main reception area). 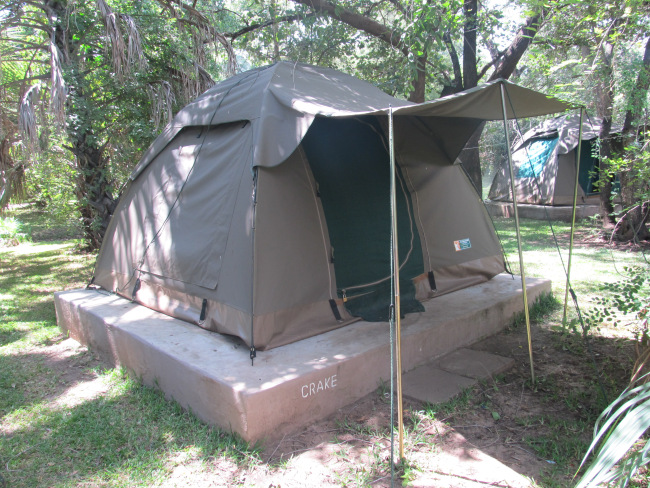 After this we were taken to the Victoria Falls. Was great seeing them full, I got totally drenched and all round it was a good experience. We had the remainder of the afternoon to relax at the hotel (I treated myself to a back and shoulder massage at the spa – I am pleased to report that it was very nice and I can definitely recommend the spa now).

We met again for drinks at the Hotel Bar for our quiz that Triana from Safari Par Excellence had been threatening us with. I was expecting a pub quiz…we got a 5 page test that we all needed to fill in! It came down to Chris from Airboat Afrika and myself as our scores were tied and we then went into a ‘sudden death’ round which I won (I did SW proud!). My prize was a 15 min Microlight flight the next morning. YAY! A private Dinner was arranged for us on the deck, and we were joined by Keith, the GM of the hotel as well as Peddy who is the activities co-ordinator from Safari Par Excellence also based at the hotel. 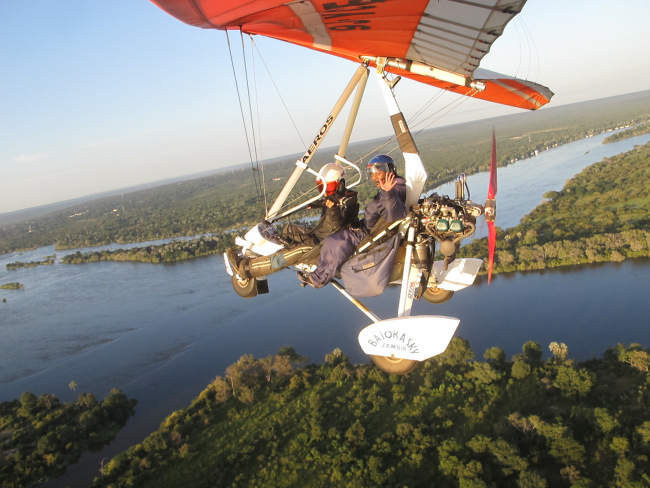 I had an early morning departure as I was collected for my Microlight flight at 06h00. These flights are done early in the morning or later in the afternoon due to the air pressure. And guests at the David Livingstone can see the microlights as they come in to land as the launch site is right next door to the hotel (Batoka Sky). Guests staying in the rooms on the far left of the hotel can also hear them (they sound like big wasps).

It was a great experience, will gladly do it again. Only complaint – it was too short. But they have 30min flights available too so maybe I’ll do that next time!

I was met by the group on my way back to the hotel and we continued to Thorntree River Lodge where we were given a short site inspection and an awesome breakfast (I was starving by that point so it felt like the breakfast of champions for me!) 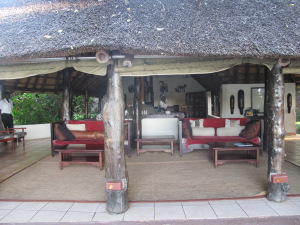 The lodge is small and intimate, only 9 units. All rooms are built on the banks of the river, most do not have railings around the outside deck areas and the ones that do don’t offer that much protection from the wildlife. Apparently it’s perfectly normal to find a hippo or crocodile lazing around camp or near the rooms. Great for couples and even honeymooners due to the intimate nature of the lodge. Not for young children at all.

The lodge is situated further up the river than the David Livingstone is approximately 30 minutes drive from the centre of town.

We followed breakfast with quick visits to the Elephant interaction and the Lion Walk. Both visits were a bit rushed as they were worried about getting us to the airport on time but it was a great experience none the less.

Got some cool pictures and my nieces now think I am Superwoman after seeing the pic of me with the lions. So I gained some major street cred from this activity! 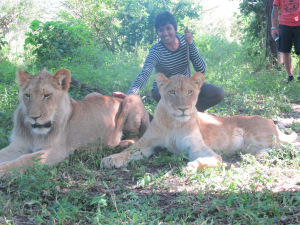 We spent a lot of time waiting at the Livingstone Airport as both SAA and BA flights were delayed, however on the plus side the airport is looking great! Completely different from before, at least 10 times the size of the previous airport and has quite a few shops. They are still finishing it off though, you can see some areas still need a paint and some wires are sticking out of walls, but in general it looks good.

It was a fantastic experience and Safari Par Excellence really made every effort to ensure that we saw and did as much as possible while there. 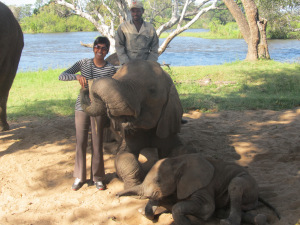