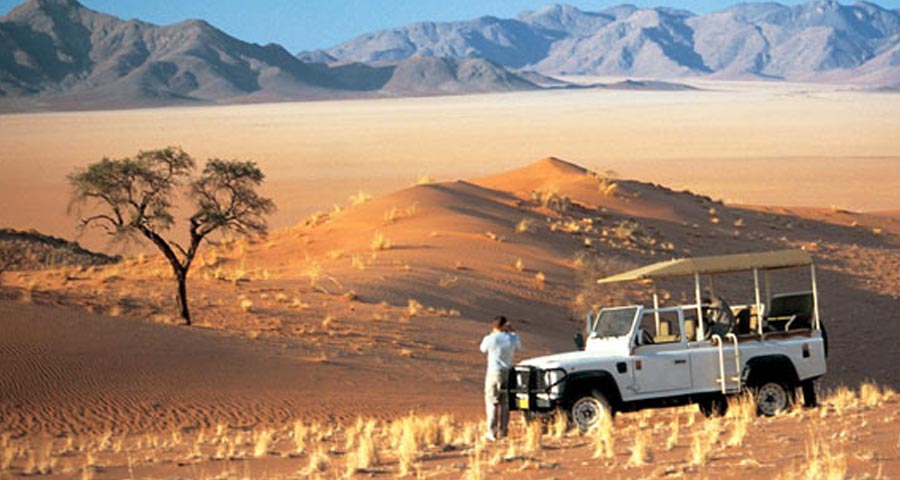 Experiencing Namibia’s natural and abundant beauty on a self-drive basis is one of the most exhilarating experiences when visiting this vast, expansive country! 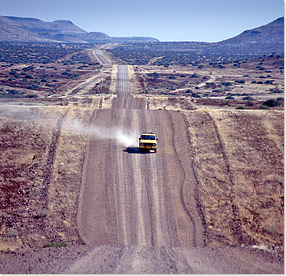 The long and straight roads on well-prepared gravel, however, often entice drivers to exhilarate in an effort to near civilization a bit faster – sometimes with detrimental consequences, as the loose gravel on the dirt roads proves to be treacherous, even on a straight. Read more… about a narrow encounter, which ended on a high note!

On a recent late afternoon, one of our repeat Namibia travellers called and advised, that he had driven his 4×4 car hire against a 15 cm high rock. On a perfectly straight road, the car skidded and careered off the road into the Namib Desert, coming to a grinding halt, against the rock. No one was injured but they had to leave the car right there, as they just could not drive it any longer. Fortunately, this incident happened just 20 km before Sossusvlei Lodge, so clients hiked a lift to the lodge with a local farmer and called the relevant SW Africa staff member.

We called one of the emergency mobile numbers for Budget/Bidvest and immediately had access to exactly the person, who had delivered the car to the clients in the morning in Windhoek. After describing the situation to him, John advised, that he would consult with his manager and get back with details as to how they would proceed but in the meantime, no-one should worry about the car by the side of the road – ‘Namibia was different to other countries in Africa’ – ‘more positive’,better people’ he said :). As a Namibian, I had to chuckle about this comment and prayed that John may be right. 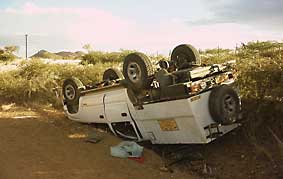 10 minutes later he called and advised, that the car would just have to be left where it was, in good faith, as their towing vehicle was up north in Namibia, where another car of the same category had hit a rock with the same results. They would replace the car with a Nissan X Trail, a higher category car, without an additional charge to the client; the car would be delivered later the following day.

The following morning, John called and let us know, that they had already sent the X Trail on its way the previous night and that the car would be delivered this morning. According to our client, at 6h30 in the morning, he had a new car on his doorstep! Great service all around, which has left the client confident to continue his self-drive itinerary through some of Namibia’s remotest areas.

The reason we are sharing this incident with you is to please warn and warn your valued travellers to Namibia, to heed this warning – DRIVE SLOWLY on a well-maintained dirt road in Namibia. The loose gravel on the road has the very same effect on a car as an iced up tar road overseas!

Thank you to Bidvest car hire in Windhoek for an outstanding emergency service!